The Cast of Avatar Reunited 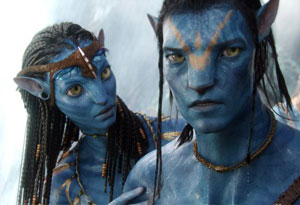 Photo: Twentieth Century Fox
The director and cast of Avatar —James Cameron, Sigourney Weaver, Zoe Saldana and Sam Worthington—have seen success even they couldn't have imagined while working on the film. In just a few months, it became the highest-grossing movie of all time. Director James Cameron already has three Oscars® for Titanic, the second-highest-grossing film and will likely add to that count at the 2010 ceremony, where Avatar is nominated in nine categories.

The gang reunited at James' headquarters in L.A.
Sigourney: You told me once you started thinking about this movie when you were very young, you know, 14 or 15. That this is the movie you wanted to see. What were you thinking about back then, flying on a banshee? Or a beautiful warrior woman like Natiri?

Sigourney: What did you think would be the most daunting challenge?

James: The biggest challenge was [the Navis' faces]. In a really emotional moment, just like a tear welling up in the corner of the eye, could we make that as real and emotionally compelling to the audience as a photographic version of it?

Sigourney: And you did it.

Sigourney:For those actors who think, "Oh, we're being replaced," what I felt as an actor was that you wanted everything to be drawn from us, from our souls.

James: That's right. You were the wellspring, you were the head of the river and it was [the effects people's] job to really preserve that or not.… What I told them was: "Don't do less, and don't do more. Make sure you don't miss anything, because there was always the danger.… Don't embellish, don't raise the eyebrows more, don't make her more surprised." Because that would be…

Sigourney: The first time we saw it with a real audience, I wanted so to fly, and I wanted so to be with the animals and be in that world and I just think that I became a total audience member, and I think that's what films do to be people. Very rarely do you sit in a dark movie theater and the film starts and it's almost as if the director's hands are holding you.

Sigourney: Are you rooting for [Kathryn Bigelow, director of The Hurt Locker and your ex-wife]?

James: For me, it's kind of a no-lose scenario because if she wins I get to celebrate the fact that she's finally been recognized after 25 years as a stunning filmmaker. And if we win, then the team is honored and all the people that worked so hard for four and a half years on this movie and believed in it so much are honored. And maybe the Academy will share the love between the two films, which would be the smart thing.

Sigourney: Apparently you saw Star Wars and you were driving a truck and you said, "That's it, I'm going to make movies. "

James: I quit my job, yeah. I quit my job after Star Wars. I said: "Okay, I've got imagery like that in my head. If that's what people really want to see." When Star Wars became the highest-grossing film in history, I thought, "I'm doing the wrong thing driving a truck; I should be a filmmaker." 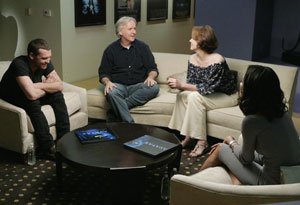 Photo: ABC
Sam: We both met [James] for the first time in [his office], which was a bit like going to the principal's office. He was sitting in the corner so you had the big long walk in, so automatically your butterflies are stirring.

Zoe: I remember we went downstairs and he put me on tape and I didn't pass out, I didn't sabotage the audition. It never even felt like it was an audition. It just became this incredible chemistry that would wake me up in the middle of the night and I would say, "Damn man, I don't want to be sleeping, I don't want to be eating, I just want to do this." I've never felt that way before, where like nothing else existed.

James: I guess I'm most proud of the fact that we made a big commercial movie and it played by the rules of a big commercial movie—we reached a big global audience—but we did it with a message. And I would even argue that some of the success of the film is based on the fact that people are feeling this other level to it. It's connecting them to nature, it's connecting them to a sense of an important cause.

Sigourney: I think that's what so wonderful is that people come up and the first thing they say is, "I've never seen anything like it, and it's so moving."

Zoe: Yeah, I think about a month ago I took my niece and she's only 6—and we did talk about this, about how it might not be appropriate for kids under a certain age—but a 6-year-old, they get up every 20 minutes to go to the bathroom. Fortwo hours 40 minutes, she never got up, never uttered a word. It touched her in such a way that I'm driving her home and I'm like, "So do you want to talk about it?" and she's like, "I think I might need a moment." There was this peace. She got it; it made her feel.

Sam: Well, you listen to a song, okay? The first time you listen to a song you get off on the beat or the way it's put together or the way the band plays it. The first time you see this, you get blown apart by the emotion of it, the world that you've created, all the special visual effects. But you only keep going back to the song over and over again if the words actually hit your heart, and people aren't just coming back to this movie twice or three times. We're talking to people who've seen it five or 10 times.

James: The film asks us to look at ourselves as human beings from the outside, really if you think about it, from nature's point of view. If we could go and take the perspective of nature and look back at ourselves, that's what the film is doing, and by the end of the movie you're rooting for nature.

James: The whole press tour on this film has been a wild ride. What's that been like for you?

Sam: I think that about sums it up. It's bizarre. You know me—I don't really think too far ahead. The fact that the movie came out is still mind-boggling.

James: That we got it done.

Sigourney: But, I think it is very moving to come to these nights that are about bringing the community together and sharing that very warm celebration of all the work that year. But what I think is fun about it this year is that when we come, we're like our own little tribe. We're all together and this is our movie and we're proud of it.

James: It was a long haul and we worked together a long time. You either come out of that enemies or the closest [friends]. It's the mutual respect and the bond, and I think we could all imagine doing it again.

Sigourney: As long as we could have tails, I'm right there.

James: That's the thing you said when I sent you the script. After I sent her the script, she said, "I always wanted to have a tail."

Sigourney: That's where my head is at.

Sam: So when you go to this awards show, are you going to wear one?

Sigourney: You know that's an interesting thought. It'd be fun to wear a tail.

Sam: Here she is modeling the latest in blue felt tails.

James: The next time we all see each other is going to be at the Oscars, right?

James: Although actually there is a tradition, the night before the Oscars on Titanic we all got together for dinner, so you guys have to come to dinner the night before.