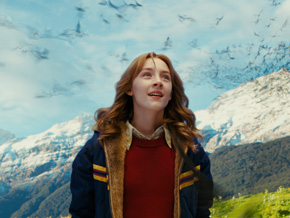 The Lovely Bones, based on Alice Sebold's acclaimed 2002 novel, has plenty of box-office draws. There's the director, superstar Peter Jackson of Lord of the Rings fame. Then there's the all-star cast, including Mark Wahlberg, Stanley Tucci, Susan Sarandon and Rachel Weisz. Add to that a story that kept book clubs everywhere on the edges of their seats, and you've got a recipe for greatness. But the standout of the film might come in the form of Saoirse Ronan, who at 15 has already made quite an impression on the Hollywood community. At 13, she was nominated for a Best Actress Oscar® for her role in Atonement. This season, her name is appearing on the short list again, this time for her portrayal of Susie Salmon, who narrates The Lovely Bones from the "in-between" world of the living and the dead. Ronan filled us in on working with Jackson, the movie's dark premise and what it's like being a teenager at the Oscars.
Q: Peter Jackson is known for building crazy beautiful fantasy worlds in his films, and he's done a similar thing with you the "in-between" world in The Lovely Bones. What was it like working in that setting?

A: It was very interesting for me because I had never done anything like that before. I had only worked with a little bit of green screen, not even blue screen, so it was a new experience for me and something that I did have to get used to. But Pete was wonderful. As you know, he's worked with blue screen quite a lot and the whole big visual side of movie making. He would talk to me during takes to describe what was going on around me so I could react to that, and we would play music to reflect the emotional side of a scene. Things like that helped me imagine what it would be like and react. So it actually wasn't difficult. He was always there to let me know what was happening around me.