Leaving the Dark Side: Q&A with Rufus Sewell 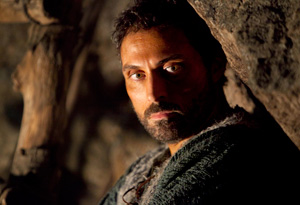 Photo: Egon Endrenyi
In any good period piece, two things are for certain: Good and evil will battle it out until the last sword is swung, and British actor Rufus Sewell will probably be playing one of the bad guys.

But in STARZ's medieval miniseries The Pillars of the Earth (airing in eight parts starting July 23), Rufus' character finally sees the light—and it's good. As Tom Builder, a mason with lofty dreams of building a cathedral, Rufus brings the beloved working father from Ken Follett's epic novel to life.

Rufus reflects on his first impressions of the Oprah's Book Club selection, how being a father influenced his performance and why he'll never look at a classic piece of architecture the same way again.

Joan Wagner: Before signing on for the film, had you read the book?

Rufus Sewell: Um no, before, no I hadn't. But in between reading the first two episodes and getting the final ones, I read the book and enjoyed it very much. Even though I was aware that a lot of the material I was reading probably wouldn't make it into the finished script, it was incredibly useful.

JW: How did you prepare to play Tom? Did you study with artists before filming?

RS: Well, I studied with stonemasons, which was exciting, basic training and that was really cool—not that, you know, I wouldn't recommend myself to build you a castle or even fashion any kind of stone at all. But it was really useful, if anything to get to know some of the characters and look at the environment and how they operated with each other and get some blisters. I did that with Eddie Redmayne [who plays Jack] and the other actors around me. Every day we'd go in and study, and that was great.

JW: What surprised you most about stonemasonry?

RS: [laughs] I'd say what I'd have for dinner every day. The endless stock supplies of that cart coming in at 8 o'clock in the morning, and I couldn't send it away. So inevitably despite that I became an actor, I ended up having to do the real work, which I resented enormously. 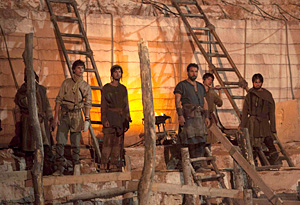 Photo: Egon Endrenyi
JW: So, now that you've played Tom Builder, do you look at architecture and buildings differently?

RS: To me, that was what was really fascinating about the book, and when I was thinking about playing Tom is the idea of looking at old cathedrals and realizing the men who built them...I mean, I'm working in Rome at the moment and I'm walking across buildings that are 2,000 years old and going up close and seeing the brickwork—these tiny, thin Roman bricks. [I'm] realizing the people here who made those bricks would stop for lunch breaks and someone might have a snack that his wife made for him and someone might be making his own and someone would have better quality sandwiches. And then people would have their little rivalries and their teasing and who is popular and who is unpopular.

The day-to-day politics of what drove people don't change. The medium of expression might change—the tools they use, the things they wear—but actually what drives people and how people interact with each other is the same and always will be. Across the world—whether you're in a tribe or in the city—it's the same across different ages. And that, for me, is what really fascinated me and what I think is the appeal of it. That when you go to Canterbury Cathedral and you realize it was built by people just like us that went to work every day and it was an adventure and it took hundreds of years sometimes. That's extraordinary to me.

The most difficult scene to play

Photo: Egon Endrenyi
JW: What was your favorite part about playing Tom Builder?

RS: Well, for me, I think he was a working man. And as an actor, lots of struggling actors work in bars or serve in restaurants. Whenever I was struggling and before I went to drama school, I would work on building sites. ... People I knew like my uncle's friend was a carpenter and I was a carpenter's mate. I was a laborer, never skilled because I was young and unqualified. So I'd work on building sites. ... Even though I was a student—and later a drama student—[I was] working with people who were much, much better read than me, much smarter—not just in terms of common sense, not that cliché—but actually the intellect that was far superior to me, and they could work with their hands.

I've never had a chance to play a working family man like that. In fact, it's not often I've been allowed to play a part that you'd even let near children, to tell you the truth, which was really nice [laughs]. To play a father, to play someone who went through so much and was flawed and he had this blind sides but he was essentially a decent man struggling to do the right thing and failing and succeeding and that I found very moving.

JW: One of the most difficult scenes to watch was when Tom had to leave his newborn son in the middle of the road. As a father, was that difficult for you to play?

RS: It was incredibly difficult. It's just one of those things you read it, I mean, [it's] the whole first the introduction of that character. ... I don't want to give the game away, but the things that happen to him later, the things that bind him and the problems he has to deal with I just found emotionally very compelling. They hit you in the gut.

JW: In making this series, did you have a favorite scene?

RS: No, I didn't have a favorite scene. And also you can have things that are your favorite when you read and then there are things that surprise you. And there were so many things that I really loved. I liked all of the scenes with the children and with my son. I loved all of that because it's something I haven't had many chances to do. I am a father, but I haven't had much chance at acting playing a father, and I liked that very much.

The hottest couple in Kingsbridge—Tom and Ellen 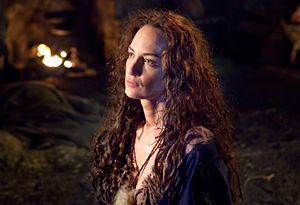 Photo: Egon Endrenyi
JW: Tom's relationship with Ellen is also a cornerstone of the story. How was it working with Natalia Wörner?

RS: I loved working with Natalia. She's a really wonderful actress, and we've got a similar sense of humor. ... We communicated on the same level and just things like that they can often be a matter of good fortune. The moment we met, as soon as we started practicing with each other, it was kind of already there. It was very easy and it was a really, really good working relationship. I like her a lot.

JW: It's nice to see some of Tom's passion come back with Ellen after he loses his wife, Agnes, who in comparison can seem like a little bit of a drag.

RS: [laughs] Poor Agnes. I like that relationship, that it's very kind of mutual and they'd obviously worked together for a long time. But in the book, it's basically on her grave that [Ellen and Tom] consummate [their relationship]. That might well work in the dreamy sequence of the book, but somehow it got a little more spaced out with a little more decorum. Something a little more gentile.

JW: In a project like this, do you find taking bits of your character with you, or do you find yourself putting a little of yourself into them?

RS: I don't think it's a matter of trying to put yourself into anything conscious like that. It's just part of you that responds. I think if a character appeals to you, there are certain parts of yourself will come to the fore and other parts that will play down. I recognize myself to a lesser or greater extent in everything I read, good and bad, and that's part of being a human being if you're honest enough. And obviously the darker parts are the things you don't let control you. There are certain things I don't find in myself, thank God, and there are things I can find equivalent of. And for me the bits of Tom, there are certainly bits of me that are similar. I am not like him, but in many ways I am, you know. I find it a difficult thing to talk about. I think you try to keep it as honest as possible and so its your own experience too and you look through your own eyes and you try to mean it, you know?

The legacy Rufus Sewell hopes to leave behind
JW: What was it like working with Ridley and Tony Scott on this series? One of the things about the book that our readers found was they were so swept away with the relationships that the action kind of faded into the background. In the film, the action is front and center.

RS: ... I suppose thing about a book is there are no budgetary limitations. There's no casting limitations. You cast, and then you do the best as you get along. You read it according to your imagination, and in your imagination you may spend more time imagining certain things, and kind of bloodthirsty fellow reading the same book might spend more time imagining the battles. It's about interpretation.

But the battles—it's actually a very violent book, a very textual book, and that's just a matter of emphasis. What I like about this miniseries, which stops it from being too cheesy and mainstream TV, is it's sexual, it's dark and it's violent. And what you kind of get with a kind of Ridley and Tony Scott film is a very adult, very gritty, kind of feel to it. And I think that's what comes from both having permission to the material and them being behind it, but very much it was Sergio's direction. He's a very passionate and very human director.

JW: Is the grittiness and the drama and the sexuality what sets this apart from other period pieces you've done?

JW: Tom's legacy ultimately is the cathedral. Looking at your own life, what would you most like your legacy to be?
RS: I'd like an omelet named after me. I'm not too ambitious about that kind of stuff.

Get to know more of The Pillars of the Earth cast