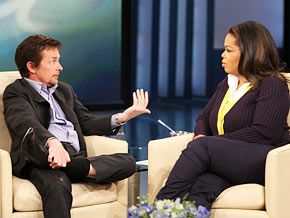 PAGE 10
In March 2009, Michael found himself back in the headlines after President Barack Obama lifted the eight-year ban on federally funded stem cell research.

For years, this has been a major initiative for his organization, the Michael J. Fox Foundation for Parkinson's Research .

Embryonic stem cell research is a controversial topic in American politics. Opponents and anti-abortion activists believe using human embryos in the name of science is immoral. Supporters of the research believe the findings could help treat millions of men and women living with ailments like Parkinson's, cancer and heart disease.

Michael believes President Obama's decision is a step in the right direction. "It was absolutely crucial that this research be unfettered and allowed today to go forward in a responsible way," he says. "People's concerns, I understand, and I just have faith in our scientists and the research community that they'll do this ethically and to good purpose."

Published 03/19/2009
As a reminder, always consult your doctor for medical advice and treatment before starting any program.