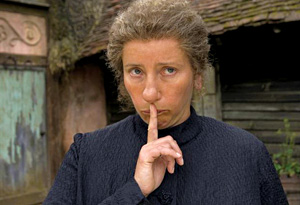 Photo: Universal Pictures
PAGE 3
RB: Is there anything about Nanny McPhee or the children that is based on anything you've experienced as a mother?

ET: Well, I started writing them four years before my daughter was born because I was interested in writing something that was for everyone. I was very fed up with being corralled into groups and being marketed to. Not just in film but in virtually every regard. The commodifying of absolutely everything in life is getting me down slightly, so my real aim with these movies was to make something that everyone could go to. They'd know that they would be catered to, that they would have a nice time, that they could take very small children and still have a great time. I think that is about wanting to make a very good film and nothing else. The demands of making a good film for a large age range are very different than the demands of making a film, dramatic or comic, for a smaller age range. And that I find fascinating and very challenging in a great way. I love trying to create scenes that I know children will understand, that will have the emotional bite that they require, that won't take it too far but that will also make adults literally cry. Just immediately start crying. That's a wonderful thing to play with. And it's hard; it's really hard, which is why they take years to write. But each time I've written one I've learned a lot. When I wrote the first one, I had all sort of complicated beginnings. It was after two goes at the beginning of the movie and not getting it right that I finally worked out that the simplest way was the best, which is always with the words "This is the story of me and my family." Which is all you need to know, and then you can get on with it.