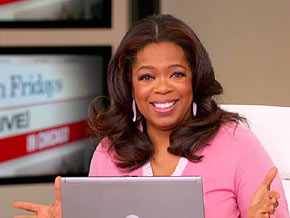 Some of Oprah's famous friends are already posting on her page, including Ali's husband. George writes in to ask Oprah to take care of his wife, who has a head cold. Shaquille also woke up early to send Oprah one of her first tweets!

Ellen tweets to ask why Oprah's online instead of working on their O magazine cover !

While the cameras roll, Oprah attempts to send a tweet of her own. What's her first post? "ASHTON KUTCHER IS NEXT!" Then she writes, "HI TWITTERS. THANK YOU FOR A WARM WELCOME. FEELING REALLY 21st CENTURY."