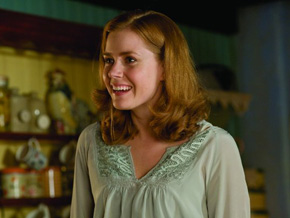 Photo: Universal
Few actresses can even imagine a year like Amy Adams had in 2009. Her turn as Sister James in Doubt earned her her second Oscar® nomination, and the summer smash Julie & Julia proved that an all-female leading cast can rake in ticket sales. In Night at the Museum: Battle of the Smithsonian, Adams' role as Amelia Earhart helped send box office numbers soaring to more than $70 million in just one weekend. "I'm very grateful for the year," Adams says. "I just look forward to the new year—I think there's a lot of new and different things ahead."

With her romantic comedy Leap Year poised to become the first 2010 release to hit number one at the box office, the actress is setting her sights on her most important role to date—mother-to-be. Adams opens up about her new film, wedding planning and motherhood.
Leap Year may be a romp of a romantic comedy, but this Oscar nominee wasn't afraid to get down and dirty for the role. Set in Ireland, Adams plays Anna, a type A real estate home staging expert who travels to Ireland to propose to her boyfriend on Leap Day. With a dashingly handsome barkeep-turned-driver (Matthew Goode) by her side, Anna encounters every obstacle possible on the road to true love—including a lot of rain.

"They had hoses in the river and were pulling water into the rain machines. So it was cold, and it was river water," she says. "Now, I grew up in Colorado where river water—that's a recipe for a gut-ache. They're like: 'Oh no, it's perfectly clean. I put it in my whiskey.' I was like, 'Okay, well, if you're willing to put it in your whiskey I guess it's fine to pour over me.' That seemed to be the thing to win my confidence."
Though some scenes sent her teeth chattering, Adams says the warmth of the script drew her in. "I just loved the character of Anna and the journey she takes away from this ideal and materialism into a more organic sensibility," she says. "I know that's something that's been a part of my journey, as just sort of really staying my intellect, so to speak, and letting my instincts speak a little bit more."

It certainly didn't hurt to have leading man Matthew Goode on board. "We had sort of a natural banter right away," she says. "We just went back and forth a lot, and we're very different personalities, and it worked so much for the characters because he's very English and I'm very American, both of us very proud."

Why Amy Adams can't wait to be a mother