No matter your mood, there's a great book to suit it. Don't forget to print the full list here! 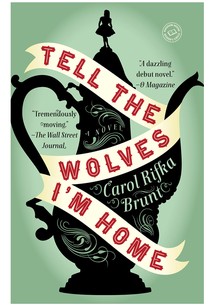 
There's really one person who understands 14-year-old June Elbus—and it's not anybody at her suburban high school. Nor is it her benign but boring accountant parents or her older sister, Greta, who has recently "turned mean." The only one who "gets" June—who understands her need to wander the woods wearing Greta's old Gunne Saxe dress—is her mother's gay painter brother, Finn. And he's dying of a disease just starting to have a name. So begins Carol Rifka Brunt's Tell the Wolves I'm Home, a dazzling debut novel about a transformative relationship—first with Finn and then his partner, Toby, who's regarded by the rest of the family, in 1987, as a murderer. The book is also about sisters, art (Finn becomes posthumously famous for a painting of June and Greta), and loyalty. But mostly it's about a girl learning "that the past, present, and future are just one thing" and that sometimes it's all right to look for connections in all the "wrong" places.
— Sara Nelson
Published 06/25/2012
PREVIOUS | NEXT