Paperbacks Worth the Wait!

Finally, the hit books of the year are out in lightweight versions (with lower prices). Toss them in a bag and head for the warmest beach—or armchair. 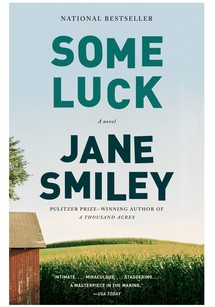 Amazon.com | Barnes & Noble | Apple Books | IndieBound
In an age of literary pyrotechnics, unreliable narrators and blurred genres, Jane Smiley has written a ravishing and defiantly old-fashioned novel set on the same Iowa soil she tilled in her Pulitzer Prize–winning A Thousand Acres. Some Luck (Knopf), the first book in a three-volume series, chronicles one family's triumphs and travails as they work to wrest a living from their farm.

Opening in 1920, the novel tracks the fates of Walter and Rosanna Langdon and their children over three decades. Frank, the firstborn, grows into a brilliant, brashly seductive man who seeks wartime adventure in Africa and Europe and eventually settles into an uneasy domesticity on Long Island. Joe, an animal lover, remains with his parents on the farm. The angelic middle child, Lillian, marries a secretive suitor who whisks her off to Washington, D.C., while the two youngest, bookish Henry and practical Claire, balance their own aspirations against chores and obligations. And all the while, Walter and Rosanna's union endures, roiled by doubt at times yet rooted in a bone-deep connection.

Reminiscent of the work of Willa Cather and Alice Munro, Some Luck ingeniously spirals outward from the Langdon farm and back again, capturing the arc of personal and historical change in forthright prose that unexpectedly takes flight.
— Hamilton Cain
Published 02/05/2015
PREVIOUS | NEXT