Lush historical novels, wise contemporary tales, thrillers that will scare the dickens out of you. (And speaking of Dickens, we've got him, too.) 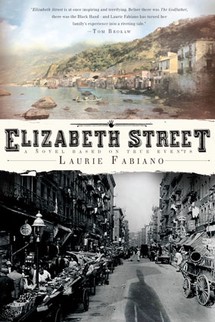 Barnes & Noble | IndieBound
In her debut novel, Elizabeth Street , based on her family's history, Laurie Fabiano examines the lives of Italian immigrants who struggled to survive in the tenements of New York City in the early 1900s. Giovanna is mute when she embarks for America, her voice having disappeared as news of her husband's death arrived. But once she sees land several months later, she can speak: "[Her voice] wasn't loud; it was strong and deep as if it had been buried...." Determined not to become another immigrant broken by poverty and prejudice, Giovanna immerses herself in the shadowy world of extortion and murder to fight the Black Hand, a precursor to the Mafia, and save her family. "What plans do you have for me...L'America?" Giovanna asks. Over almost 20 years and more than 400 pages, we watch her naivete turn to wisdom in a place where the reality of daily survival quickly overshadows even the idea of prosperity.
— Elizabeth Thompson
Published 06/17/2011
PREVIOUS | NEXT