The most moving, beautifully written, so-true-it-hurts stories of the year. 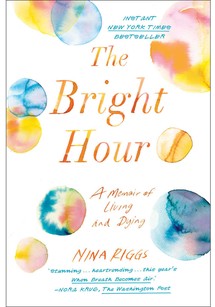 Amazon.com | Barnes & Noble | Apple Books | IndieBound
Throughout her life, poet Nina Riggs sought refuge in the written word. But following a cancer diagnosis at 37, she began writing and reading with a fury. Four months after Riggs’s death comes The Bright Hour, her profound and poignant memoir. Kelly Corrigan contemplates the author’s journey and her belief in the power of literature to help us grapple with challenges—even those we can’t survive.

I wake up before 6, sneak past my daughter’s room, and make my way downstairs in the dark, hugging the side of the steps that doesn’t creak. I scan the headlines on my cell while coffee fills the pot. I scroll through Twitter, looking for op-eds, while I drink my first cup. Before I refill, I plug my phone into the charger on the far counter, where I can’t reach it from my chair. Then I switch to whatever book I’m reading.

I start the pages wound up, buzzed into anger by the combination of caffeine in my bloodstream and vitriol in the news. But if the book is good, I soon stop squinting, my shoulders loosen, I begin to lose time. I don’t notice the sun drawing a line on the wall beside me. I start to feel my life again. If the book is superb—as Nina Riggs’s The Bright Hour most certainly is—I reconnect with how intensely I love this imperfect world, how grateful I am to be in it.

Riggs was a wife and mom in North Carolina who loved words and the wizards who brought them to life. When she was 38, with two young boys, her breast cancer became metastatic; among other things, The Bright Hour recounts “the endless parade of techs and nurses and doctors.” Between appointments and on her longest nights, she turned to Atul Gawande, Annie Dillard, Michel de Montaigne, and her great-great-great grandfather, who was—of all people—Ralph Waldo Emerson, her beacon.

Riggs believed deeply in reading. In books, she writes, we find the most “beautiful, human kind of coping,” a way “to imagine the countless vulnerabilities and stories that fill the world.” Riggs read to have her hardest questions addressed, if not answered, and in her book she wonders: What are we to do with these faulty containers we live in? How are we to think about all the inevitable loss, but not obsess? What words will suffice for the last conversation we have with our children? She was passionate in her belief that debating the merits of a paragraph of prose or stanzas of poetry could open new territories of understanding.

In her final year, Riggs writes, she found particular solace in Montaigne. A conundrum he raised in the essay “That Our Desires Are Augmented by Difficulty” struck her to her core, according to her husband, John, who shared his wife’s devotion to the French philosopher. Montaigne wrote that while others around him were adding fortifications to their homes during an unsafe time, he decided to leave his unbarricaded because “they were only lost by being guarded.” That essay, Riggs writes, also had meaning for Emerson, who describes Montaigne as tasting “every moment of the day,” including the painful ones because only pain enabled him to “feel himself and realize things; as we pinch ourselves to know we are awake.” The words of both men powered Riggs’s determination to keep death constantly in her field of vision without letting it darken every experience—an approach that allowed her moments of true happiness, even at the end, in a hospice room where her children played.

Every book holds within it the potential to ease an aching part of us. Especially, it turns out, as the ache gives way to silence. Riggs died on February 26, 2017. Before she did, she took in the bright hour, when, Emerson tells us, we “cease...to be a prisoner of this sickly body and to become as large as the World.”

I put down The Bright Hour a slightly different, and better, person—unbearably sad and also feeling, as Riggs did, “the hug of the world.” The coffee beside me was cold.
— Kelly Corrigan
Published 11/28/2017
PREVIOUS | NEXT